So the whole reason for a blog is to keep up with steady posts but I have neglected to do so. Not that it's to big a deal with only a few even intersted in it but I will continue do update as often as possible.

On the gaming side of things it's been a great summer and fall with lots of new board games, some painting of miniatures and playing lots. Fallcon was a blast, although I had small turnouts for the events I did get to play quite a number of games.
Posted by robert at 7:56 AM No comments:

Hello all, again it's been a while, guess I'm not so good at this blog stuff. Anyways I recently got the new Warhammer book a little before release date and have a few comments. The game is definetely going to move faster, although the mechanics of the game are basically unchanged, Move, magic, shoot and combat there are significant changes in each of these elements. You can always premeasure for movement, shooting, magic and warmachines. Charges are more random, 2D6 plus move inches so unless your very close almost within your move rate it's easy to fail a charge. Magic phase has changed a bit, you now roll 2D6 for the Winds of Magic and every wizard can roll to try and get a 6 which adds a dice to the pool max 12. Dispell dice are the total of the highest dice rolled for the winds plus each wizard can try to add one on a roll of 6 as well. Casting is 1-6 dice and add the level of the wizard. Casting values in the Lores are much higher now. If a wizard rolls two natural 6's the spell is cast with irresitable force so go off no matter what but then the player must roll on the Miscast table and suffer the damage.
Shooting is the same except you can always shoot in two ranks and premeasure.
Combat is strictly iniative based and you can get support attacks from the second rank. All ranks are 5 wide except monsterous creatures who are 3 wide. If you have double the width, a horde, you can get support from the third rank.
There are some more changes and I'll update.
Posted by robert at 8:11 PM No comments: 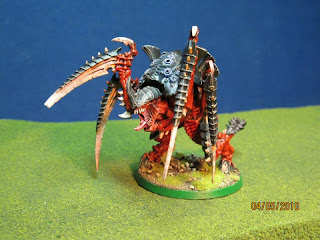 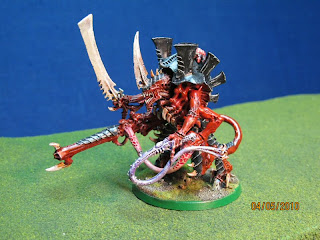 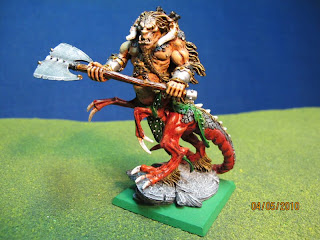 Just a few images of more figs I have been working on recently. Haven't played many games though, a little quiet in that department but tonight we will be getting together again.
Posted by robert at 4:05 PM No comments:

Yesterday was a great day indoors not so nice outdoors with more snow and unseasonably cold May weather here in Calgary. I enjoyed the day at the Sentry Box playing War of the Ring (GW) and some Warhammer Invasion. Later I played Dominion Intrigue and Starfarers of Catan with the Wife and daughter. We also played a couple of games on Friday night as well, Oregon and Catan Germany one of my favorites of the series.

Thursday Albert and I had a 3,000 point battle of Orks (me) vs. Chaos Dark Legion of Epic Armageddon. The Orks got the upper hand but some of the Chaos units are impossible mainly due to size. Especially when you can have 12 units of Chaos Marines, Landraiders and Obliterators all in one formation. I just went after the smaller units and the objectives. Still my favorite mini game by far.
Posted by robert at 12:57 PM No comments:

Well the time just zips by and here we are a Friday before the May long weekend. Just going to relax for the most part but do have a large game of Epic Armageddon planned for Sunday with John. Probably going to play my Eldar since last time we did a 6,000 point battle I used my Tyranids and it was quite the game.
This past week we played Rum and Pirates, a very entertaining game of pawn placement game to pick up tokens which provide VP's. There is also a little bit of dice rolling when you wrangle to see who ends up with the best sleeping beds. Fun.
We also tried to beat Witch's of Salem, an impossible coop game and even with some added house rules we still couldn't beat it, maybe next time.
Wednesday Dan brought along Zombie State, an independent game but nicely produced and used a reverse system rather then building up you try and prevent the greatest losses of areas on a map as the Zombies grow in numbers. We all kinda liked it, may need to try it again.
Last night Bill Ramsey and I were planning on some 40K but instead decided on the new Horus Heresy which in turn lead us to set up and play the original version. Close game too, with Bill as the Imperium almost killing Horus on the 4th turn but I pulled out a list minute win by going against the odds and attacking the Emperor in the Inner Palace and with some lucky rolls and rerolls killed him thus ending the game, awesome. Since we had set up the new Horus Heresy we played through a bunch of turns as well.
I just love gaming.
Posted by robert at 6:20 PM No comments:

I know that blogs are more about regular updates and such but lately time finds me not as frequent in front of the PC. We have been busy, with some travelling but I am still playing lots including today. A great new game is Horus Heresy from FFG a remake of a GW classic and very well done indeed. I have played three times all as the Imperium trying to prevent the spread of Chaos and the death of the Emperor. If your a fan of GW's 40K universe and like two player war games with lots of eye candy this is a game for you.
Also this week we played Carson city, Myth, Ticket to Ride and Cyclades and I got in a game of 40K with my Tyranids vs Alberts Blood Angles, a bloody fought battle and loads of fun.
Posted by robert at 6:45 PM No comments:

Sorry it's been a while since I posted but we were enjoying a week in Los Cabos, Mexico. Had great time, relaxed, ate and the highlights were the zip lines, just awesome with grappling and rock climbing. The other highlight was all the games we played together, my wife and I, which has become traditional for us on holidays and I always bring quite a selection.
Tonight I plan on either playing the new Horus Heresy again or if that falls through I'll be at the Sentry Box for the meet up.
I'll post again soon, hope everyone is doing well and playing lots.
Posted by robert at 12:24 PM No comments: